In whom the whole structure, being joined together, grows into a holy temple in the Lord. In him you also are being built together into a dwelling place for God by the Spirit.

Father Michael Smythe, a missionary priest, who was stationed at Fort Smith, traveled through Eureka Springs around the year 1880. He started construction on a frame church which would not be completed until
1882. That year the Diocese of Little Rock recognized the new foundation of faith as a “station with a church.” Between 1882 and 1901 priests visited the station on their regular monthly trips through the Northwest Arkansas missions.

Earlier in 1901, the Hotel Dieu Hospital, a large two-story building opened by the Sisters of Mercy from St. Louis, had been established as a convalescent home, hospital, school, and convent. There were 34 pupils attending the opening day ceremonies at the Saint Elizabeth’s School. The Hotel Dieu Hospital closed its doors in 1913 after eleven years in operation but was placed later under the guidance of the Olivetan Benedictines.

In 1904 a three-story frame rectory was constructed beside the Sacred Heart Church and was used as a rectory, school, and meeting hall for the Catholic community. This building is still in use today as the Mount Victoria Bed and Breakfast.

Also in 1904, just a few blocks away on Crescent Drive, Richard Kerens was building a memorial for his deceased mother, Elizabeth. This memorial is now referred to as the Rotunda, or entrance of the church.

In 1908, after lengthy discussions with Bishop Fitzgerald, Kerens added a church proper to the existing Memorial Chapel, and the dedication ceremonies of the Saint Elizabeth Catholic Church were held on May 11, 1909. The original memorial became the vestibule of the church, with all the exterior construction material of dolomite limestone supplied by local quarries. Kerens imported marble altars and mosaic flooring from Italy. Paintings depicting the Stations of the Cross were donated by the parishioners. Four pieces of statuary taken from the Sacred Heart Church and Hotel Dieu – statues of Our Lady of Perpetual Help, the Sacred Heart of Jesus, and two kneeling angels – were moved to the new Church. These fine pieces of turn-of-the-century statuary still have their home in the interior of the church today. In 1910, Richard Kerens funded the construction of the Bell Tower. Richard Kerens became the United States Ambassador to Austria-Hungary in 1909.

The coming years lay heavy on the church, and disrepair set in almost immediately, not because of inferior construction, but from lack of adequate heating. For a few years the church became a mission out of Harrison because of the small congregation. Second collections were started to defray the cost of repairs, but not until Father Joseph Lauro’s pastorate in the early 1950’s did the remodeling really begin.

Father Lauro did extensive restoration to the interior of the church and constructed a stone rectory at the rear of the church. He then enlisted the talents of an Italian artists’ society which, under the direction of sculptor Checchi Mario, executed marble statues which grace the gardens of the church, including the statues of Our Lady of Fatima, the children, and the sheep, which were erected in 1953, along with the statues of The Sacred Heart of Jesus, St. Joseph, St. Francis, and St. Elizabeth. In his second term at Saint Elizabeth, Father Lauro originated the plan for the Stations of the Cross, in white Carrara marble, also sculpted in Italy, which are arranged on the wall beside the ramp leading from the Bell Tower to the door. The designer said the statuary consumed 40 days of work by five sculptors for any single piece. The names of various families were etched into the base of each statue, thus commemorating their donation. The stations were installed in 1958.

In 1983 the large chandelier was donated which boasts approximately 7,500 crystals and 19 interior lights. In 2014 the main roof of the church was completely rebuilt, with many of the terracotta barrel tiles retained. The church was totally rewired in 2018. In 2019 the art restoration project was completed, the Rotunda ceiling was painted deep blue, and the gold stars were also added to the Rotunda ceiling.

St Elizabeth Catholic Church is listed on the National Historic Register and has become a landmark in Eureka Springs. The church’s unique Bell Tower has welcomed thousands of visitors each year from all over the world. They come to admire the simplicity of the stone church which was constructed years ago, and which still holds its charm today. 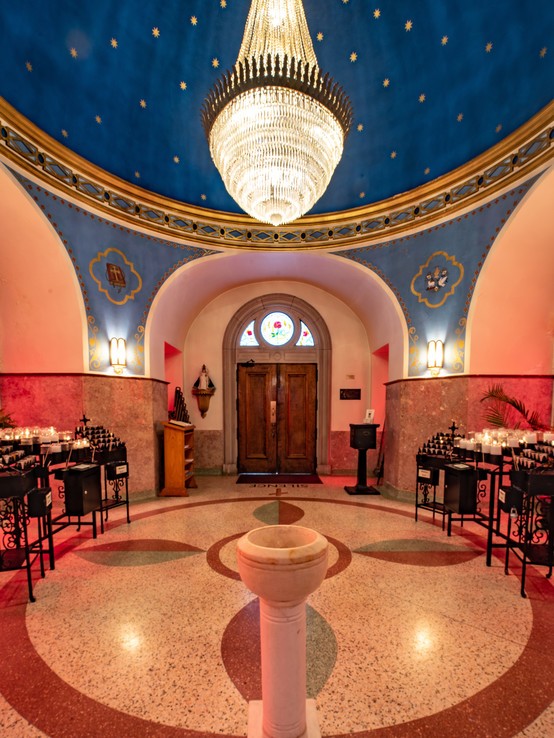 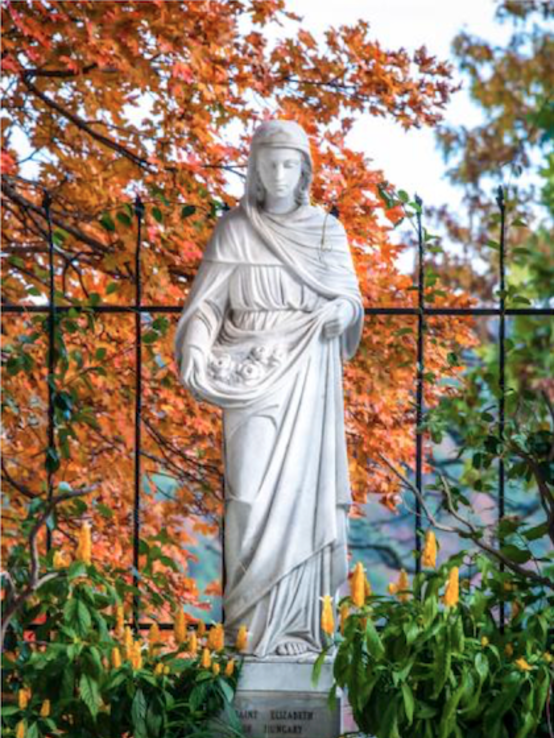